KB5014019 is now available for Windows 11 in the production channel and it’s an optional preview update, which means users can safely ignore it if they can wait for the next Patch Tuesday update. It is available via Windows Update, but you can also download the offline installers of Windows 11 KB5014019.

Offline installers are helpful when you’re unable to deploy the cumulative preview update via Windows Update. Regarding the improvements in this update, it’s actually a big release with a couple of new features. For example, Microsoft is enabling Windows 11 22H2 Spotlight feature in version 21H2.

The Windows Update is only being offered via the Settings app or for manual download via Microsoft Update Catalog. It’s generally a good idea to avoid these patches because they’re still in testing. Of course, an optional cumulative update is considered a stable release, but there’s a reason why they’re marked “Preview.”

Notably, these updates aren’t meant for corporate machines. An optional cumulative update is released for enthusiasts who cannot wait for the next Patch Tuesday update to try out new features or fixes. The main purpose of optional updates is to test critical fixes ahead of the Patch Tuesday release.

Once you’re on the Microsoft Update Catalog, click on the ‘Download’ button and open the .msu link.

As a reminder, Microsoft recently made it easier for users to download the update package in browsers like Google Chrome. Previously, Microsoft Update Catalog served packages via insecure connection HTTP. As a result, some browsers blocked the downloaded and users were required to copy and open the .msu link in another tab.

Windows 11’s latest optional update apparently enables a pretty cool feature called “Spotlight”. For those unfamiliar, Spotlight is a feature from Windows 8 and it lets you automatically change the lock screen wallpaper.

Spotlight downloads high-quality backgrounds provided by Bing and Microsoft is bringing the same feature to the desktop. With Spotlight for desktop, you can keep it fresh with pretty nice wallpapers.

Considering that pretty much everybody prefers a nice wallpaper on the desktop, it does make sense to allow users to have Windows Spotlight on the desktop too. For some reason, Microsoft never really considered adding Spotlight to desktop and many people used third-party apps or scripts to download lock screen backgrounds.

Microsoft has finally listened to the feedback and Windows 11 Build 22000.708 enables it for everyone. Once updated, you can navigate to the Settings > Personalization tab and select ‘Spotlight’.

Once you select ‘Windows Spotlight’, Windows 11 automatically downloads the Bing wallpaper of the day and replace the current background with it. It would work just like you’d expect it to work i.e similar to the way Spotlight works for the lock screen.

In addition to Windows 11 Spotlight integration, today’s cumulative update also makes changes to the Family Safety verification experience. Likewise, there are several important bug fixes, including a fix for an issue that would crash your apps or make copying files between drives slower than usual.

While the update contains a long list of fixes and some quality of life improvements, it also includes essential fixes to mitigate app crashes. It fixes an issue that caused some apps based on .NET Framework 3.5 to crash shortly after being launched. Likewise, there are fixes for a black screen, login issues and other bugs.

Here’s the complete list of bug fixes and improvements:

In terms of improvements, Microsoft says it added animation to the Widgets cion when you click or tap the icon, and the taskbar is aligned on the left. Windows Search is getting several important fixes in this release. For example, an issue where the search box input doesn’t work has been resolved. 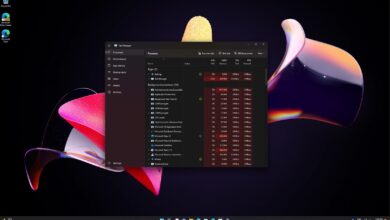 Windows 11 Build 22610 hands on: A redesigned Task Manager and more

April 30, 2022 EDT at 2:50 am
Subscribe
Login
0 Comments
Inline Feedbacks
View all comments
ADS
You can get $100 in cloud credits from @DigitalOcean using my link
Categories
Featured Posts
Microsoft teases a new colourful Task Manager for Windows 11
April 28, 2022 EDT at 2:31 pm